So You Want to be a Hare 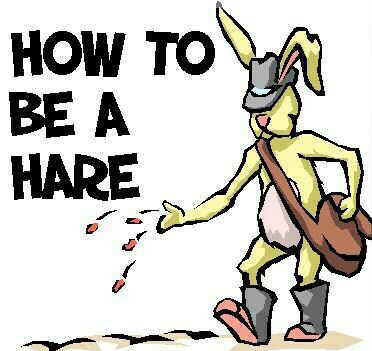 You may have Hared more times than the number of remaining hairs on your head - or this may be the first time for you to hare for the Seoul Hash. In any case, the following is a list of pointers to keep in mind. Understand these are not rules since THERE ARE NO RULES IN THE HASH - but there are TRADITIONS, such as these, formulated over the years as a result of some major screw ups that we have no wish to experience again!

Hints for the Hounds

Be on time. Run at your own pace, and rest when you feel like it. Hounds on the trail should shout "ON-ON" loud enough so those behind (perhaps calling "ARE YOU?") can hear them. When the leading Hounds come to a check, they should shout "CHECKING" at intervals until the correct trail is located. Once the trail is found, the lead Hounds should stop and shout "ON-ON" loud enough to alert the other Hounds, who may have gone checking in the opposite direction. Listen for the Horn; he blows only when he's on the trail.

Well, those are the basics. It may seem like a lot but often solitaire Hares put on the whole run by themselves. Other Hares work in teams of two - and we strongly advise against more than two Hares at a time. However, our Tradition is that each Hound should set a run at least once a quarter year. Again, please recognize that when Hares team up for a single run they also are increasing the number of runs they are expected to run per year.

Should you have any questions, please check with one of our EMs , the GM or the Hon Sec.